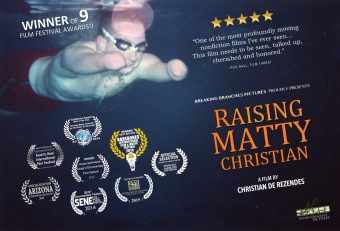 Winner of 9 awards, “Raising Matty Christian”, the acclaimed documentary returns to Rhode Island for its second public screening in the state since its premiere at SENE Film Music and Arts Festival back in April of 2014. The story is about the inspiring life of Matthew G. Christian (1983-2009) of Canton, Massachusetts, who was born without full limbs and a tongue. The film is directed by RI-based Filmmaker Christian de Rezendes of Breaking Branches Pictures. Tickets are available, and DVDs will be available for sale at the event.