November Cabaret – “The Music of My Heart” 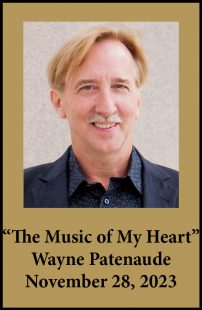 “The Music of My Heart” – This is a journey of Wayne’s favorite music; encompassing Broadway, the Great American Songbook and Pop Music.  Wayne is one of The Cabaret Club’s most beloved entertainers and we are so happy to have him back on stage.

Pastor and Minister of Music Park Place United Church of Christ, PAWTUCKET RI,  has a degree in music and theater from Rhode Island College.  Wayne has appeared in the lead roles of many summer stock productions including “Barnum,” “Sophisticated Ladies,” “Working,”  as well as in dinner theater and many murder mystery productions.  He is a member of the  Mixed Company Jazz Ensemble.  He is well known for his cabaret performances across the United States; from Providence to Los Angeles and Chicago to Provincetown.  His most recent appearances include “ Broadway and Beyond” at The Odeum in East Greenwich, RI and his own cabaret show at the  Ocean State Theater, in Warwick, RI,  produced by Ida Zecco and his performance at The Cabaret Club during the series’ premier season.