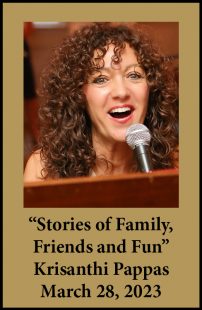 “Stories of Family, Friends and Fun!”

When you are from a traditional, Greek family, you have lots of stories to tell and songs to sing!  This will be a big, fat Greek night of thorough entertainment from one of the New England’s most reknown singer/songwriters!

Krisanthi is a Billboard® award-winning songwriter and has been a favorite cabaret headliner at many New England theaters, as well as having performed throughout the US and abroad, including a recent headline performance in Skala Erressos, Greece!  She has received 4.7 million spins on Pandora Radio and is also played on Apple Music, Spotify, Sirius XM, Google Play, Amazon and more.

Krisanthi has received high accolades from Cabaret Scenes New York, Talkin’ Broadway, Jazz Times Magazine, Downbeat Magazine, The Boston Globe and many radio personalities nationwide. You can hear Krisanthi’s voice and/or her original music and lyrics on episodes of “Parenthood” (NBC), “The Mindy Project” (FOX), “Once Upon A Time” (ABC), “One Life To Live” (ABC), “Containment” (CW), “Passions” (NBC), “Californication” (Showtime), “Younger” (TVLand) and many others, as well as independent films.