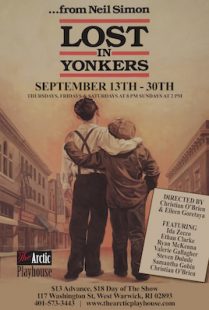 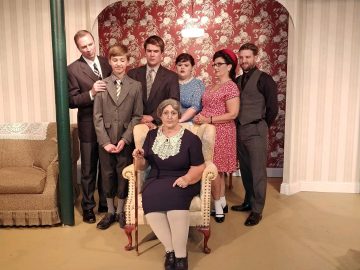 By America’s great comic playwright, this memory play is set in Yonkers in 1942.  Bella is thirty-five years old, mentally challenged, and living at home with her mother, stern Grandma Kurnitz. As the play opens, ne’er-do-well son Eddie deposits his two young sons on the old lady’s doorstep. He is financially strapped and taking to the road as a salesman. The boys are left to contend with Grandma, with Bella and her secret romance, and with Louie, her brother, a small-time hoodlum in a strange new world called Yonkers.

“Broadway desperately needs a comedy, a drama, and a hit. With Lost in Yonkers, Mr. Simon has given us all three.” – Wall Street Journal

“One of Simon’s most impressive and funniest plays.” – New York Daily News

“Laughter and tears have come together in a new emotional truth. There are moments in this play when you experience a new kind of laughter for Simon, a silent laughter that doesn’t explode into a yuk but implodes straight into your heart.” -Newsweek