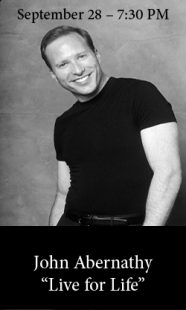 John Abernathy will return to Cabaret Club at the Arctic Playhouse in an evening of Broadway, jazz, pop, and comedy titled Live for Life!.  Backed by Jim Rice on piano and directed by Ida Zecco, this uplifting show features a variety of music by James Taylor, Joni Mitchell, Jule Styne, Jerry Herman and more.

In 2005, John Abernathy was featured in the 16th Annual New York Cabaret Convention at Lincoln Center in a tribute to Broadway composer Jerry Herman sharing the stage with legendary performers Lee Roy Reams, Michael Feinstein, Marilyn Maye, and Mr. Herman himself.  That same year, he also received a nomination for Best Male Cabaret Performer from the Independent Reviewers of New England (IRNE) for his show A Cock-Eyed Optimist in Boston.  John has appeared as an actor in many theatres across the country and toured internationally as pianist and soloist with the musical group Up With People including a performance with the National Symphony Orchestra. His CD’s Look Straight Ahead and Live Out Loud! are both available on his website www.john-abernathy.com.