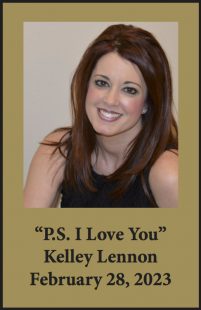 “P.S. I Love You” February is the month of love and what better way to celebrate than with some incredible love songs with a little spin…all of the songs performed will have the word “Love” in the title!

Kelley has been performing professionally in the RI area for close to 30 years. Kelley’s wit and banter, her rich voice, simple warmth, and engaging personality, make her a crowd favorite.

Some of Kelley’s most notable accomplishments over the years have included, winning 1st Place in the Female Vocalist Category of Ed McMahon’s Next Big Star competition, being selected as a contestant for CBS’ Star Search, being named Jazz Act of the Year by Motif Magazine, performing at Madison Square Garden and The Rainbow Room in New York City, headlining shows at The Stadium Theatre, Chan’s, The Jazz Stage at Waterfire , and opening for acts such as The Rascals and Herb Reed & The Platters. Kelley was also an extra in the Farrelly Brother’s movie Shallow Hal.

An avid sports fan, Kelley has had the honor of singing the National Anthem at a variety of venues, most notably for the Boston Red Sox, Boston Celtics, New England Revolution and the PC Friars. She also performs the anthem at many veteran and military events including an event with HBO’s Band of Brothers cast.