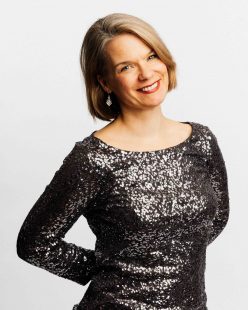 Eden Casteel has created a truly masterful tribute to the late, great Madeline Kahn.  Funny, witty, clever and always vocally beautiful this evening will delight those who fondly remember the multi-talented Kahn – as only the multi-talented Casteel could brilliantly portray.

A “stunning coloratura soprano” with “a great sense of comic timing,” performer/producer Eden Casteel is the host of “The Eden Show,” a weekly interactive online show featuring musical guests who sing, play, and love to talk. Using livestream technology, Eden is able to perform live with her guests, even if they are hundreds of miles apart.

Eden has played diverse regional theatre roles including The Proprietor in Assassins, Adele in Die Fledermaus, Yum-Yum in The Mikado, Mama Rose in Gypsy, Francesca Johnson in The Bridges of Madison County, Victoria Grant in Victor/Victoria, Mrs. Lovett in Sweeney Todd. She also performed all the soprano arias and most of the tenor arias in a re-imagined Handel’s “Messiah” with full orchestra.

Eden’s students are performers and recording artists in New England and beyond. Eden coaches vocal technique and performance, and also assists clients with all aspects of songwriting and production.

A native of Dublin, Ohio who moved to Rhode Island in 2010, Eden holds a Bachelor of Music Degree from The University Of Cincinnati College-Conservatory Of Music and a Master of Music degree from The University of Maryland. She is a past president of the Rhode Island chapter of NATS, a member of the American Guild of Organists, and a charter member of The Speakeasy Cooperative.

A go-to consultant during the lockdowns of 2020, Eden gave presentations on low-latency technology and studio use to national and international groups, including The National Association Of Teachers Of Singing (NATS), The Speakeasy Cooperative, Vocology In Practice, the Kennedy Center American College Theater Festival, and The Pandemic-Proof Singer Summit.