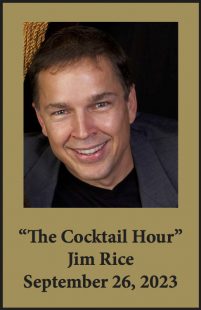 “The Cocktail Hour”: Jim Rice has a quirky, effervescent style that is all his own. Tonight, he presents to his favorite audience at the Cabaret Club his sophisticated, thoughtful, unexpected arrangements paired with his twisted sense of humor that will have you joyfully sharing libations during this masterful, musical storytelling.

Jim Rice (music director/arranger/ pianist), of New York City and Boston, is an accomplished and diverse music director, arranger, and pianist of many styles. Jim has performed in hundreds of theaters and concert halls throughout Europe and in every state except Hawaii. Abroad, Jim has been the musical conductor for the European-Broadway tour of Ken Hill’s Phantom of the Opera, as well as pianist for the Broadway production of Grease in Zurich. He has also toured nationally with Man of La Mancha and Camelot.

Mr. Rice is the creator and music director for a tribute show, “Primavera!”, which celebrates the Las Vegas years of Louis Prima & Keely Smith. Primavera is backed by a seven-piece band with soloists, Jim Porcella and Ida Zecco and was honored with the 2005 IRNE award. Primavera has been performed at numerous premiere venues including The Big Arts Theatre in Sanibel Island, FL and The Fox Theatre at Foxwoods Casino in CT.

For Ida Zecco Jim performed her critically acclaimed Estro-gin & Tonic in Boston and NYC, and orchestrated her show “Songs For The Season” for her guest performances with The Thayer Symphony Orchestra (MA) and Charlotte Symphony (FL). For John Oneil he wrote the orchestrations for Back To Ennnniskillen and So Kaye: The Songs of Danny Kaye which have been performed at a multitude of venues throughout the country including MusicFest, one of the country’s largest music festivals in Bethlehem, PA.

Cabaret rooms he has played include The Duplex and Danny’s Skylight in NYC, and The Cosmopolitan Club in New Hope PA. Locally in Boston he has appeared at the Regattabar, Ryles, Skullers Jazz Club, and every available Sunday at Club Cafe with Colleen Powers and every Friday night at Club Café with Valerie Sneade-Roy in their duo; “It Takes Two.”