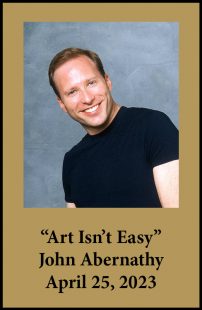 “Art Isn’t Easy” – In a personal musical story, John Abernathy interprets the incredible melodies and lyrics of the genius that is Stephen Sondheim. With arrangements by the fabulous Jim Rice and special guest Ida Zecco, John will weave together his journey through the world of theatre, marriage, and life.

John Abernathy (singer/actor)  has appeared in numerous stage productions, including Little Shop of Horrors, Guys and Dolls, A Chorus Line, West Side Story, Fiddler on the Roof, Gypsy, and Oklahoma.  He is well known as a talented and engaging performer to The Cabaret Club audiences at The Arctic Playhouse.

Abernathy also toured internationally with Up With People and has performed several cabaret shows over the years throughout New England and NYC.

In 2005, Abernathy released a CD, Look Straight Ahead, featuring Broadway songs and standards, such as A Cock-Eyed Optimist, I Can See Clearly Now, and The Second Time Around.