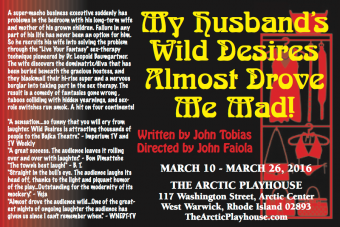 A super-macho business executive suddenly has problems in the bedroom with his long-term wife and mother of his grown children. Failure in any part of his life has never been an option for him. So he recruits his wife into solving the problem through the “Live Your Fantasy” sex-therapy technique pioneered by Dr. Leopold Baumgartner. The wife discovers the dominatrix/diva that has been buried beneath the gracious hostess, and they blackmail their hi-rise super and a nervous burglar into taking part in the sex therapy. The result is a comedy of fantasies gone wrong , taboos colliding with hidden yearnings, and sex-role switches run amok. A hit on four continents!