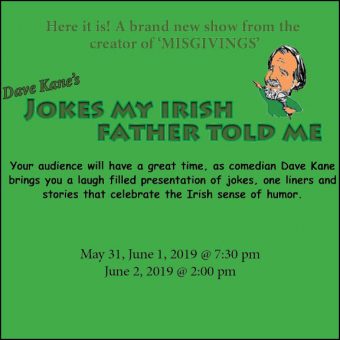 Dave Kane has been making audiences laugh on radio, tv and stage for years. His parents were first generation Irish to this country. Dave’s father, Frank Kane, loved making people laugh. He was an emcee, a singer, and comedian. So, when Dave was thinking about writing a new show, his wife suggested that he just tell his dad’s favorite jokes and the new show was born.

In “Jokes My Irish Father Told Me” Dave shares tons of great laughs on topics that cover everything from marriage and religion, to pets, aging and more.

Dave is a performer, comedian, published author, and radio talk show host beloved by New Englanders for over 40 years. Nicknamed “The Pit Bull of comedy” in the 1980s during his time as a stand-up comedian, Dave is known for his passionate stances on social issues, urging people to stand up for what they believe in and to take action in the face of injustice. One of Dave’s favorite phrases is the well-known quote, often attributed to Irish philosopher Edmund Burke, “All that is necessary for evil to exist is for good people to do nothing.”