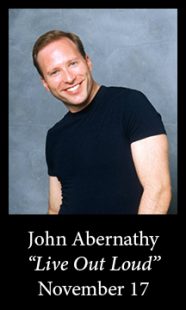 This showfeatures contemporary Broadway and Cabaret music written by Stephen Sondheim, Kander and Ebb, Elton John, Andrew Lippa, and more – all of whom are out and proud members of the LGBT community. The show was directed by IRNE Award winner Ida Zecco.

“With luck, we will have a chance to see this well-conceived and well-crafted show over and over.”John Amodeo, EdgeProvidence.com

In 2005, John Abernathy was featured in the 16th Annual New York Cabaret Convention at Lincoln Center in a tribute to Broadway composer Jerry Herman sharing the stage with legendary performers Lee Roy Reams, Michael Feinstein, Marilyn Maye, and Mr. Herman himself. That same year, he also received a nomination for Best Male Cabaret Performer from the Independent Reviewers of New England (IRNE) for his show A Cock-Eyed Optimist in Boston. John has appeared as an actor in many theatres across the country and toured internationally as pianist and soloist with the musical group Up With People including a performance with the National Symphony Orchestra. His CD’s Look Straight Ahead and Live Out Loud! are both available