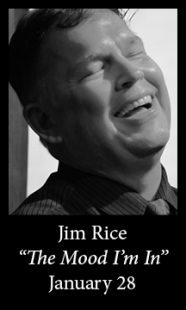 Jim’s musical arrangements sparkle with charisma, wit, and attitude . His vocal styling is that of an old school crooner meets Broadway. He swings and sings with such impeccable phrasing and time but can belt out a tune as well. This singer/pianist/arranger virtuoso promises to engage and delight The Cabaret Club audience no matter what Mood I’m — no, wait — YOU are IN!

JIM RICE (music director/arranger/ pianist), of New York City and Boston, is an accomplished and diverse music director, arranger, and pianist of many styles. Jim has performed in hundreds of theaters and concert halls throughout Europe and in every state except Hawaii. Abroad, Jim has been the musical conductor for the European-Broadway tour of Ken Hill’s Phantom of the Opera, as well as pianist for the Broadway production of Grease in Zurich. He has also toured nationally with Man of La Mancha and Camelot.

For Ida Zecco Jim performed her critically acclaimed Estro-gin & Tonic in Boston and NYC, and orchestrated her show “Songs For The Season” for her guest performances with The Thayer Symphony Orchestra (MA) and Charlotte Symphony (FL). For John Oneil he wrote the orchestrations for Back To Ennnniskillen and So Kaye: The Songs of Danny Kaye which have been performed at a multitude of venues thoughout the country including MusicFest, one of the country’s largest music festivals in Bethlehem, PA.

Jim Rice is also the Music Director and contributing arranger for Three Swingin’ Tenors. He peforms with them regularly and is the creator of their 2009 Holiday show. Cabaret rooms he has played include The Duplex and Dannys Skylight in NYC, and The Cosmopolitan Club in New Hope PA. Localy in Boston he has appeared at the Regattabar, Ryles, Skullers Jazz Club, and every available Sunday at Club Cafe with Colleen Powers.