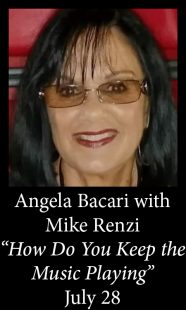 “How Do You Keep the Music Playing?”

Angela wraps her evening around one of her signature songs by Alan and Marilyn Bergman.  Her beautifully arranged and performed program of jazz, blues, musical theater and standards will fill you with joy and bring back memories.  Her remarkable life in show business from Rhode Island to New York to Vegas and everywhere in between is a story that can only be told in Angela’s voice.

Angela Bacari has spent years gracing stages from New York City to Las Vegas as an accomplished vocalist.  She is known for the song, “Baby Im’ Yours.”  Some of her many television appearances include:  The Tonight Show, the Dinah Shore Show and The Merv Griffin Show.  Angela has opened for several Hollywood veterans including Rodney Dangerfield, Phyillis Dilller and Pat Cooper to name a few.  She has served as vocal coach for last 20 years show business illuminaries such as: Liza Minnelli; grandson, Nicolas King; Marisa Berenson; worked extensively with Deana Martin preparing for her new album; and has been training and managing Billy Gilman (runner-up of The Voice).  She is a private vocal coach at her local, home studio in Rhode Island.  Angela still performs at special venues throughout the year and can be seen at Birdland in NYC with Nicolas King.